This is the first of posts detailing my current trip, which will take me around southwest Virginia, Seattle, Hawaii, Australia, New Zealand, Hong Kong, and Japan.

My first stop was Blacksburg, home of Virginia Tech. I lived in Blacksburg from 1996 - 2009, so it was both familiar and a little alien, as it hasn't stood still since I've been gone. Still, a great time to reconnect with friends that I haven't seen in years. 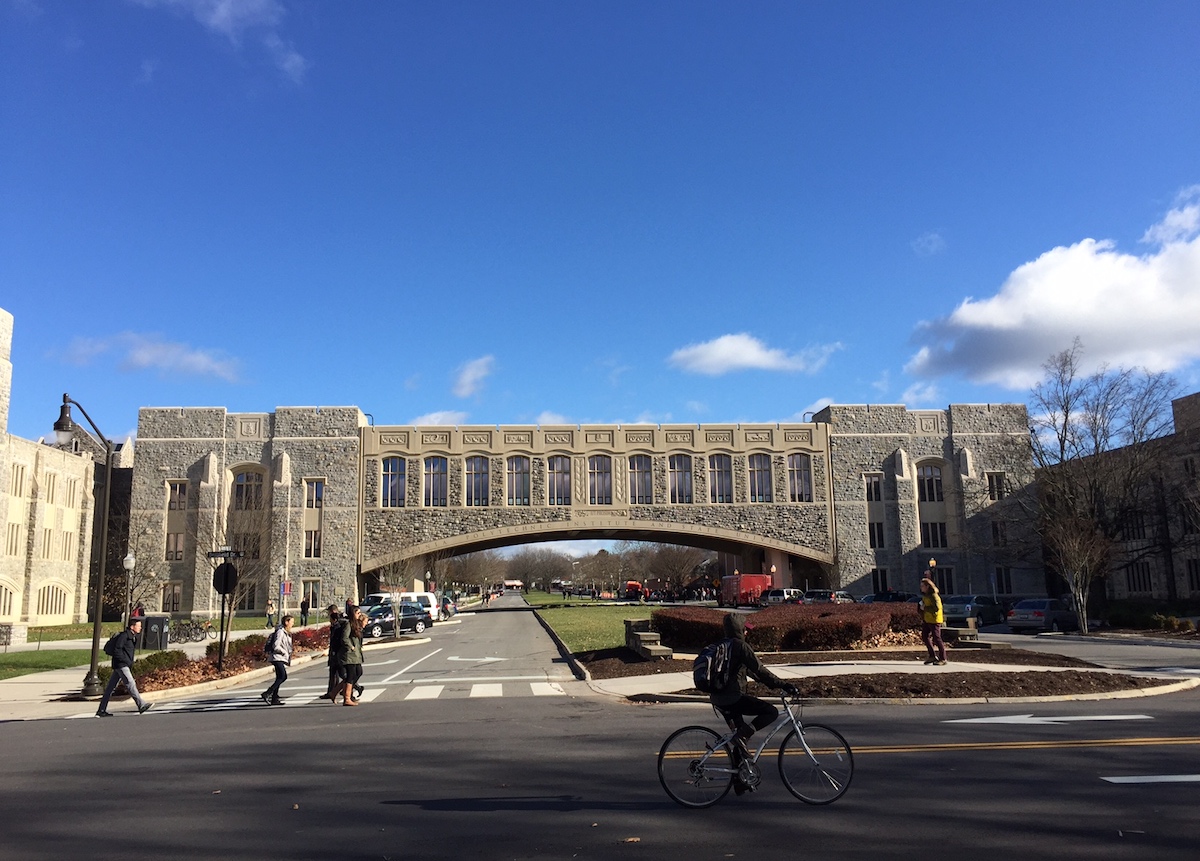 It was nice to take a stroll around campus and see all the familiar buildings. Even new building felt familiar with the use of Hokie Stone, a distinctive limestone taken from the local quarries.

The students were just coming back from Thanksgiving break, so when I first got here there were very few people around, giving it a ghost town feeling. Not in a bad way, though. I found it peaceful and quiet. 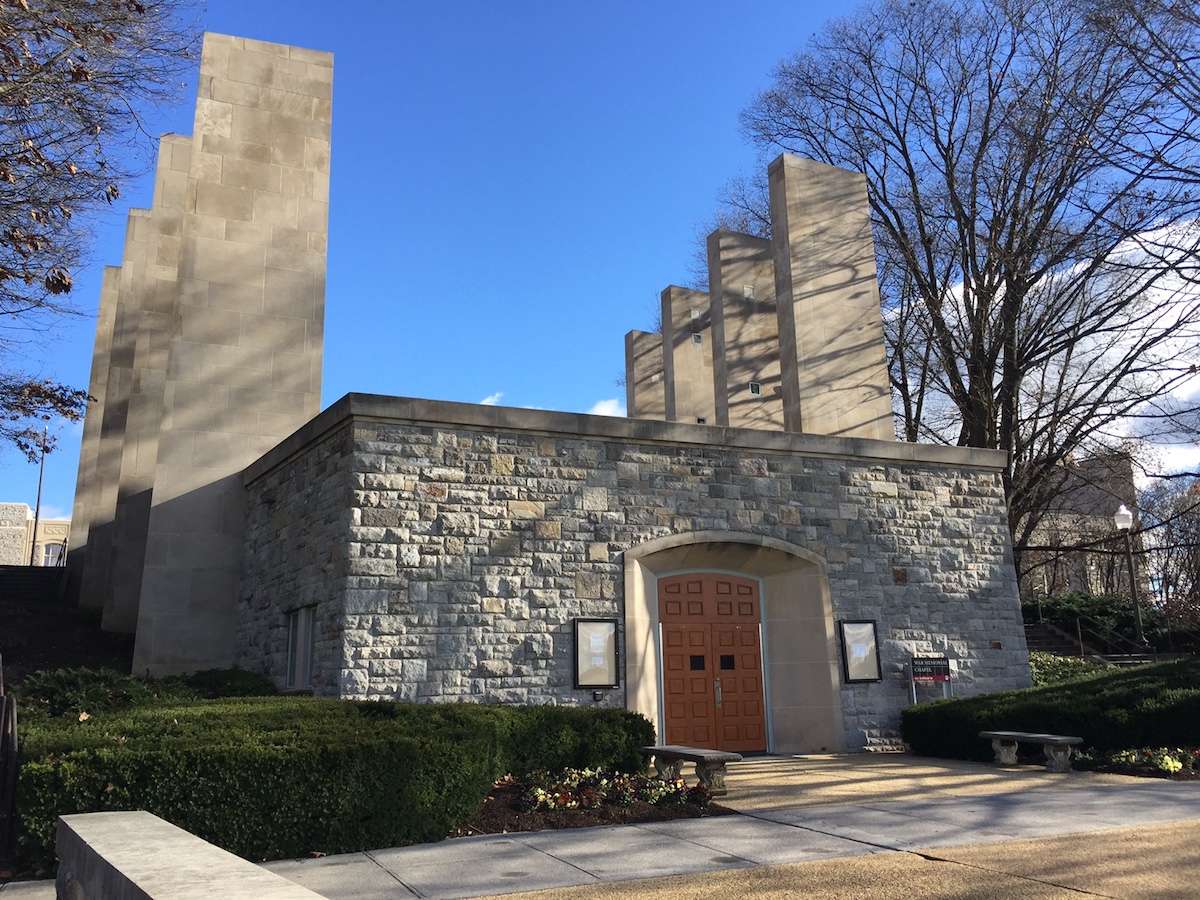 When you're walking around the Tech campus, you can't help but notice the Burruss Hall building. It's a giant building that is both familiar and imposing. If you've seen any brochures about Virginia Tech, it's likely you've already seen it. 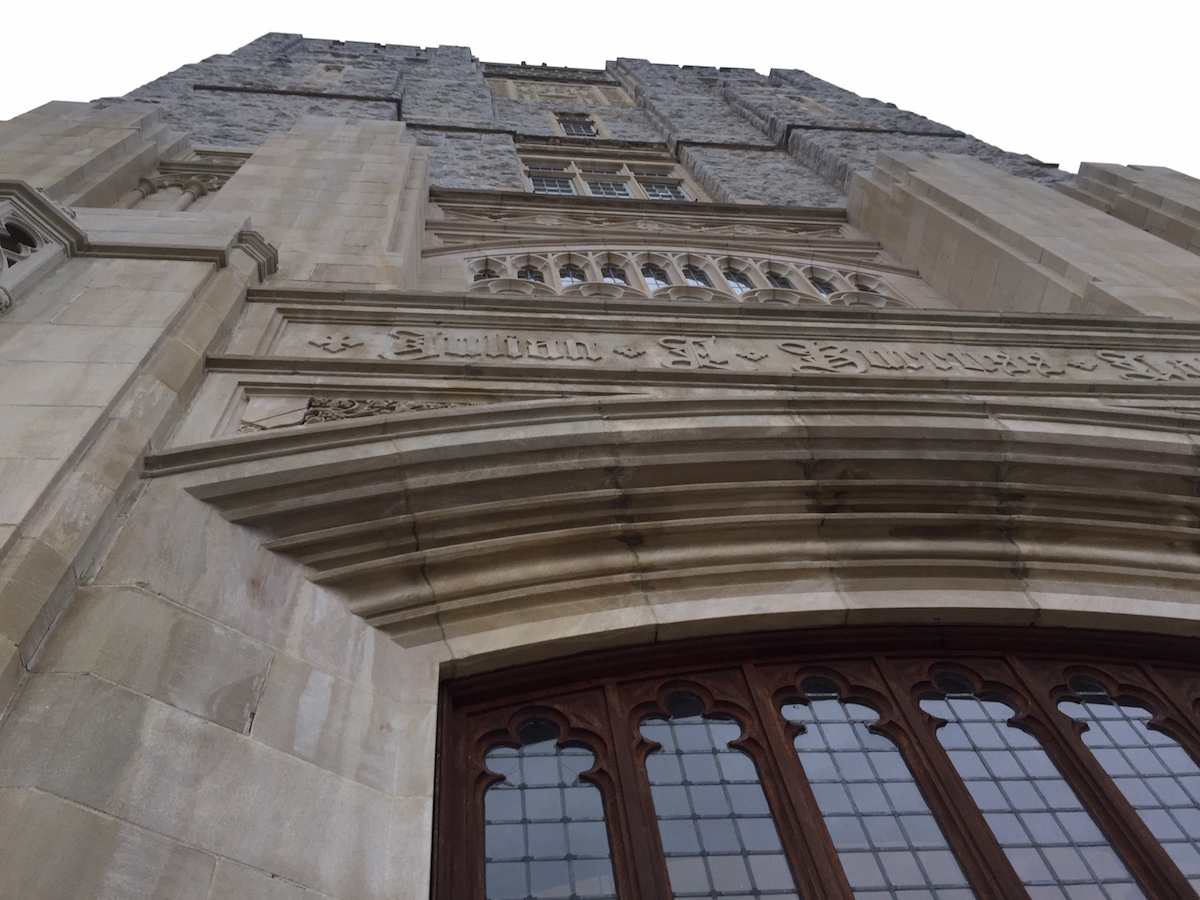 Staring up at Burruss Hall

If you step back from Burruss Hall and look down, you'll notice a ring of stones. This is the memorial for those killed in the shootings on April 16, 2007. Each stone has a name of someone who was killed that day. 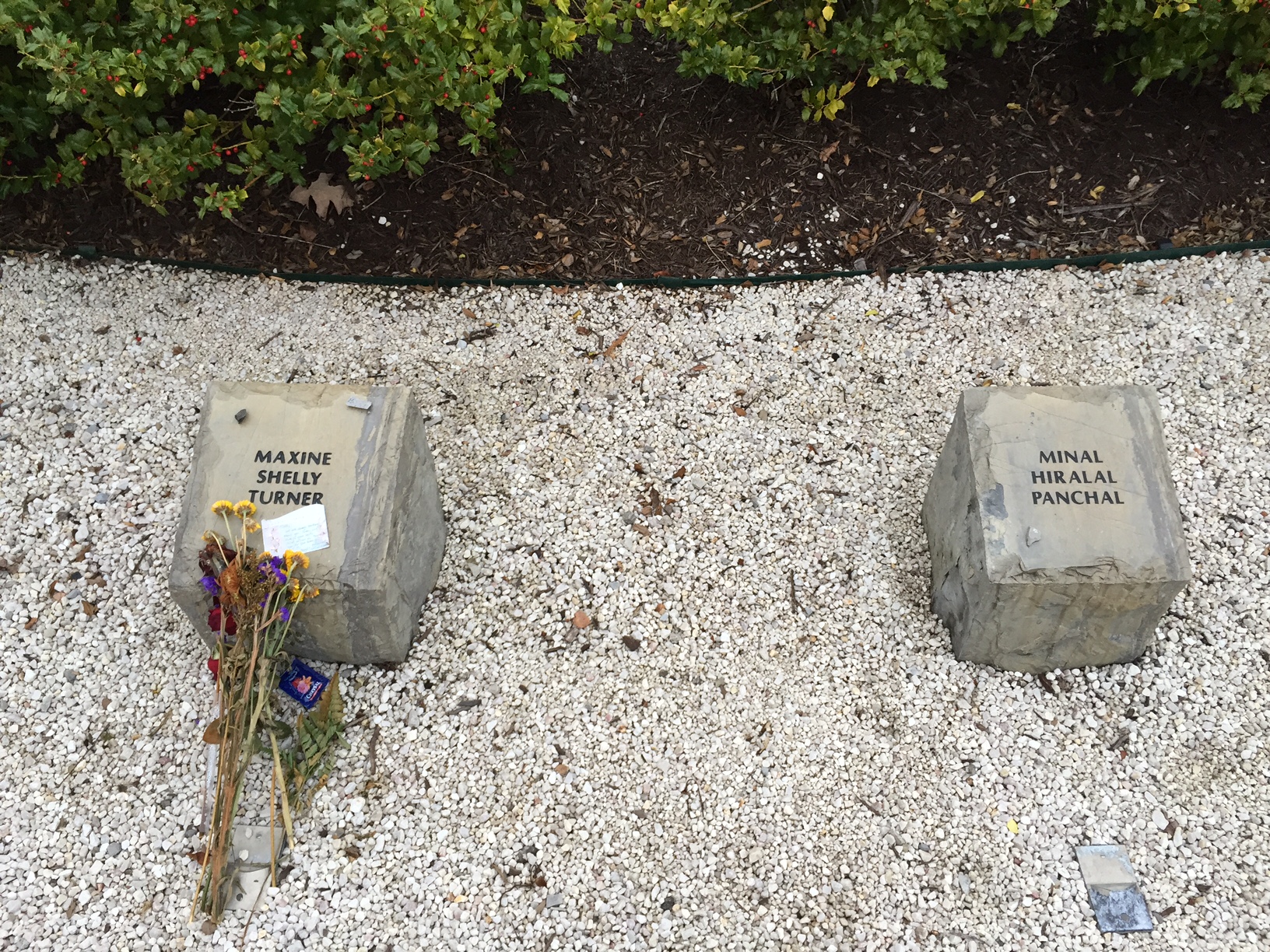 Rather than feeling overtly sad, the memorial feels more like a place to recognize and pay respect to the lost while at the same time giving the living space to move on and go about their lives. Still, the losses are felt, and the lost remembered. 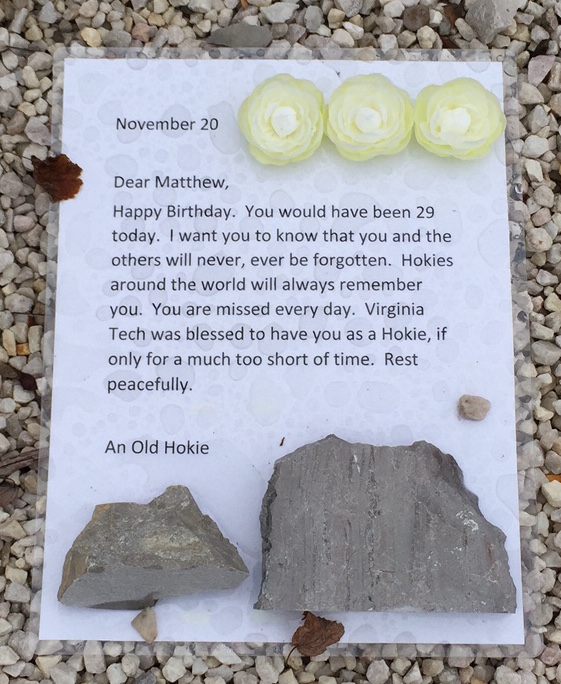 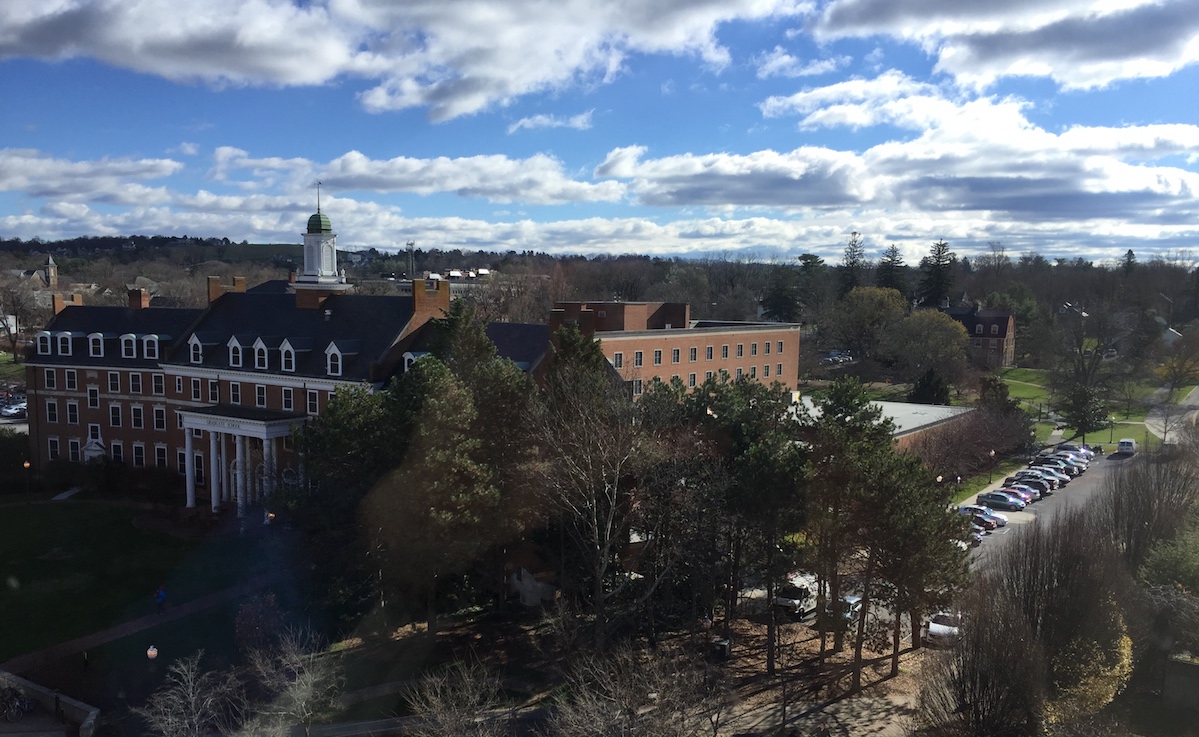 Look out at Blackburg from the Virginia Tech library

Virginia Tech is surrounded by the town of Blacksburg. It's a fairly small affair, nestled into the hills of Virginia. Downtown Blacksburg is only a few streets wide, with a few dozen restaurants and shops packed together before the streets stretch into the neighboring residential areas.

Because of its relatively small size, the student population inevitably develops a fondness for certain restaurants. Some of these became institutions that would go on to serve each new batch of students. One such institution is the Bollo's cafe and bakery. 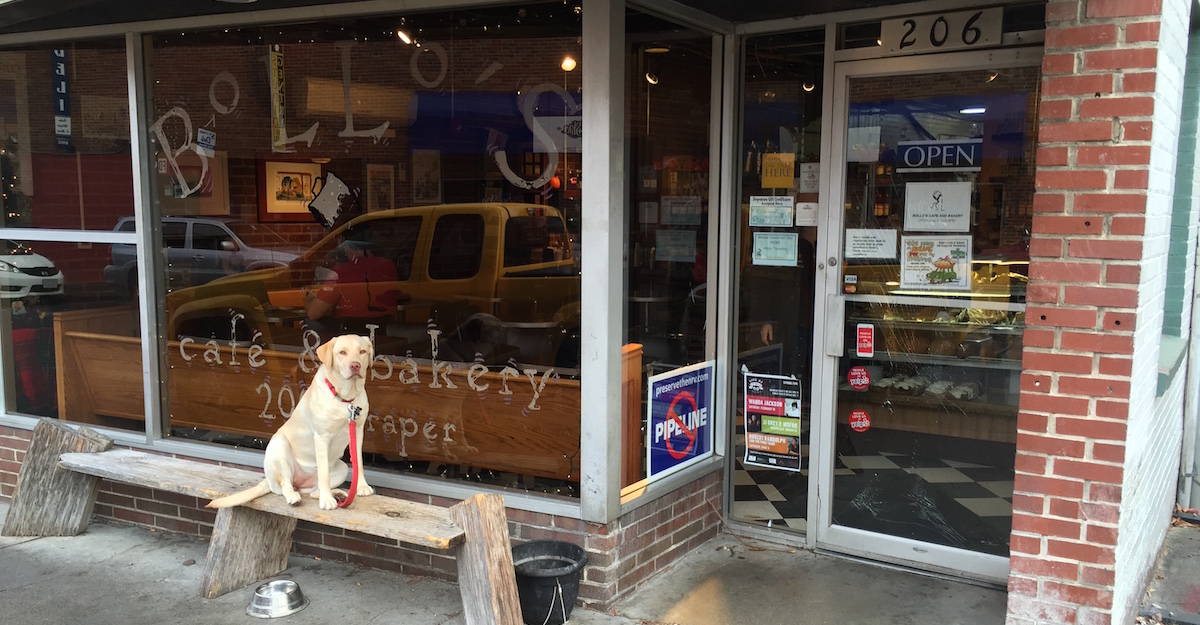 It was good to see that it's still around. As an undergrad student at Virginia Tech, I spent many a night here laughing with friends, going on dates, playing games, and drinking the strongest coffee I'd ever had. Sorry Seattle, you weren't my first latte.

Speaking of Seattle, which is currently being swallowed by the efficient apartment complex, Blacksburg still has lots of great houses in prime locations. The house I'm staying in is rich with character, created sometime in the early 1900s. Its heating has been modernized, but it still has the history intact. In the basement is a shower for the field workers to wash off. 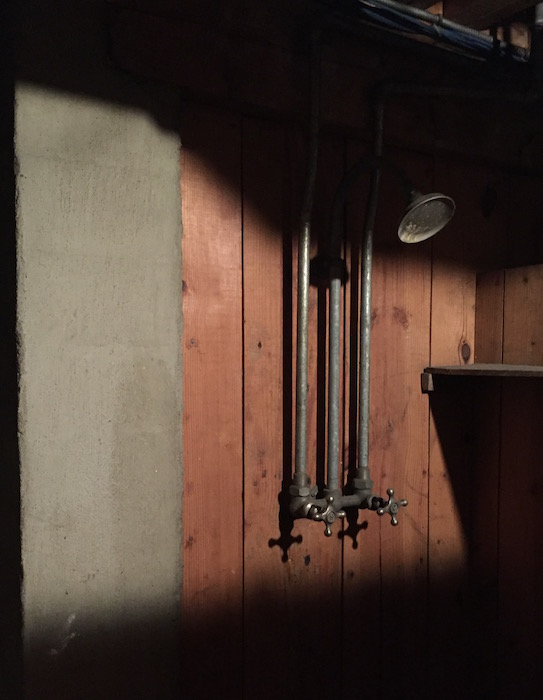 It was great to see my Blacksburg friends again. It felt like taking a slow bath in the familiar before rising to walk off to the unknown. A perfect way to start the trip. I can't wait to see what adventures lie ahead.

Previous
Building a simple JIT in Rust
Next
HandmadeCon 2015